With the Euros 2016 and Brexit having done nothing for our ‘Brits abroad’ reputation, I visit Benitachell in the heart of Brit-haven Benidorm to discover how to better blend in with the locals

As we approach the street that leads down to the sea, the most prominent sight is that of human flesh – red, raw, glistening in the midday heat. The restaurant blackboards that a few streets earlier read ‘Menu del dia’, ‘Paella del Mar’, ‘Sangria’ are now replaced by ‘Full English Breakfast only €5’, ‘Football shown live here daily’, ‘Happy Hour – two pints for the price of one’.

Until now it has been impossible to imagine we were a stones throw from Benidorm. But one walk down its most famous street confirms all of our most detested stereotypes. Don’t get me wrong, I’m certainly partial to a pint and fry-up (though rarely at the same time) but also despair for the loss of cultural immersion most Brits suffer when drawn to this part of Spain like moths to a flame.

Just moments away lies Benitatchell, a Spanish gem hidden in the shadows of its infamous export – also with sun, sea and sand but served up the Valencian way. Here, in the guardianship of a Madrilenian family, for whom the pueblo is a precious city escape, I discover the delights of this part of the Spanish coast too often overlooked by the British holidaymaker. Here are some of my insights:

Just an hours drive from Alicante airport, Benitachell in the region of Valencia is very accessible if you accept the need to hire a car. Though a bit set back from the beaches, the for-rent summer houses tucked into the hillsides offer spectacular views across the Mediterranean and a cool breeze to dilute the peak summer heat you can quite happily enjoy all day without feeling the need to leave. Renters can access the communal infinity pools hanging off the side of the mountain for a doorstep water-based fix. 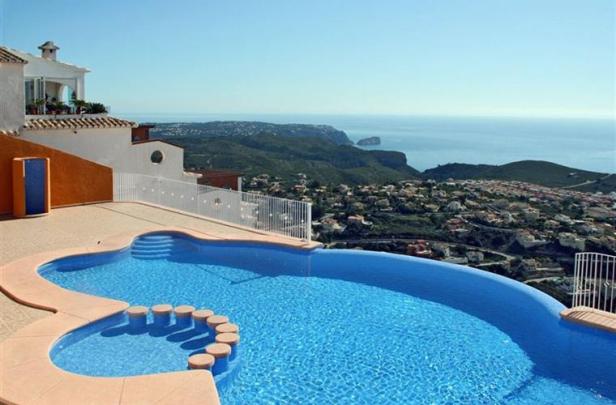 Once mustering motivation to venture out, my favourite discovery was a little nook called Cala Moraig. Here you can find a cobbled-stone beach nestled beneath the cliffs, where those able to find it can enjoy azure waters, rocks to throw themselves off and a beachside shack serving up ice cold margaritas and a mskeshift sound system to accompany the sunset. Though packed in the day, early evening leaves it perfect for a stroll and a dip. Don’t forget to pick up some glamorous river shoes or your exit from the water will be less Bridget Bardo and more man on hot coals.

For those still craving a more classic sandy spot for paddling, beach ball and a cheeky cerveza (only chilled in half pints though please! And always with a salty snack…) Denia is a good option and doesn’t have a burnt Brit in sight. Do a tour of the beach bars or ‘chiringuitos’ to stay cool and be sure to make a pit stop for helado – truly delicious ice cream, served with rum as a shake in the adult version.

You can’t visit Valencia without sampling its most famous creation in its birthplace. In the beachside restaurants, you can preorder a Paella done the ‘proper way’, with rice reaching only a few cm above the bottom of enormous pans (confusingly also called Paellas) cooked over hours before serving. We ploughed our way through a metre diameter of the stuff with a whole host of ocean delights crammed in its stodgy midst, mopped up with crusty bread and moreish alioloi generously available for dunking. You can wash it down with Sangria or its close but lesser-known cousin Tinto de Verano, which more simply but refreshingly mixes red wine and soda water. Perhaps counterintuitively to sun-starved Brits, be prepared that lunch will take you out of the sun and linger around the table for a good many hours into the afternoon – but explains how the Spanish never suffer sunstroke and often need a siesta. Patience is a virtue.

Once the heat of the day has passed a walk up to Cabo de la Nau is a must. ‘The cape of the ship’ marks the southern limit of the Gulf of Valencia, and a vista of the nearby island of Formentera for those with the inclination to climb to its peak. The views over the water reach the distant horizon and the gentle altitude breaks your sweat with a satisfying breeze.

Who knew, the Spanish love to jet ski and for a fair price you can bomb it along the water from Moraira to reach the bottomless caves lining its coast. You don’t perhaps feel quite at one with nature as you fire across the waves but it is an adrenalin kick and with the engine off while you explore the cave waters inaccessible by other means you feel less gas guzzling motorhead and more trepid explorer.

After the sun has gone down, it’s best to steer clear of the night lights of Benidorm and instead venture into the quaint old town. In complete disregard for tightening budgets, each small town in Valencia blows their taxes on what becomes the night of their year – a day festival celebrating a saint of their choosing where the entire town puts on their best and dance and play music and go mental for fireworks. On 22nd July Benitachell held such a party, with every house on the central streets opening up their doorways so we could have a nosey inside and women sauntering around in traditional Valencian dress. In neighbouring x, they celebrated pagan x. in a uniquely Spanish manner flouting all health and safety rules and brandishing lit fireworks they danced and flung sparks into the crowd dressed as devils. About as Spanish and local as it gets, attempting to blend in at these dos is futile but it feels special to witness.

If you hit Benidorm beach, look out for the back streets which have a few tapas bars serving pretty authentic pinches and keep you out of Burger King Benidorm branch. You can also climb up the hill at the harbour and spot the older Spanish generation dancing x in the less modern beachside hotels.

Any discerning traveller avoids the tourist traps like the plague – Benidorm being the epitome – but what their snobbery may be robbing them of is the Spanish diamond in its rough. By shunning the fat fried and hops cravings of my countrymen, I was able to experience the idiosyncratic relaxing, eating and drinking ways of the Spanish right where you might least expect it. Then again, perhaps the city-dwelling Spaniards who flock there in fair weather prefer their secret stay that way…