As the pound continues to plummet, Sarah Bradbury takes her chances with extreme snowsports on a budget in Mont Blanc’s prestigious mountain area, Chamonix

As I inch down precariously on the back edge of my board, soft snow slipping disconcertingly beneath its inadequate-seeming weight, I crane my neck to catch a glimpse of what might lie beneath. But before I manage it, I summarily slip back to my default arse-in-the-snow position. Fear now palpable in my voice, I muster: “Er, it looks steep – how steep is it? It looks so steep.” 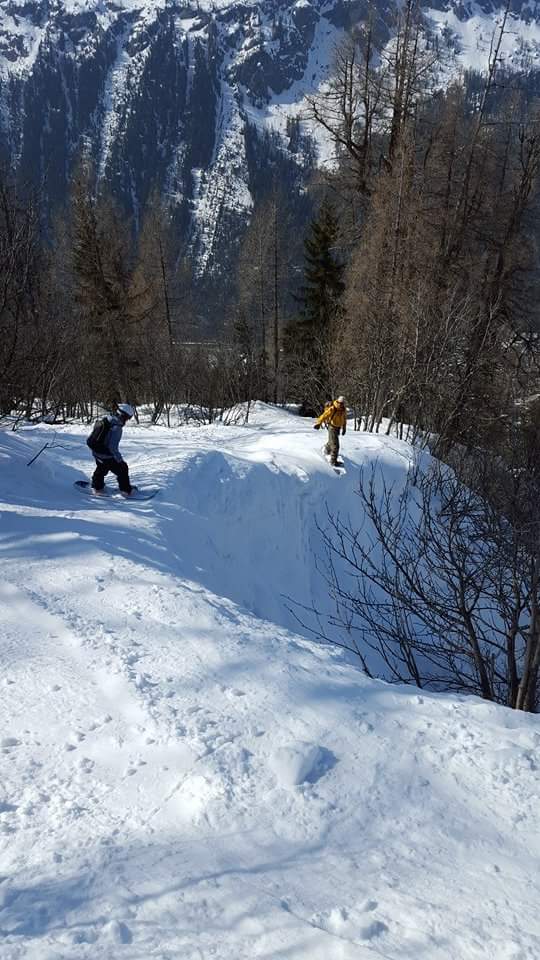 “Allé Sara, allé,” says Cyrill, our rugged Chamonix-born-and-bred mountaineer guide, as he drops effortlessly out of sight. And so, with the other eight group members’ breathes held, their eyes fixed on my back, I slide down the precipitous slope, into the abyss.

It’s day four of our off-piste snowboarding tour in Chamonix and I feel somewhat hardened to the relentless nerve-shattering that is following our fearless guide down all the bits of the mountain that don’t seem fit to ski. Add to the incline of the “runs” the lacklustre snow covering of an unusually mild winter, and I feel we’ve inadvertently signed up for an entirely different sport – not off-piste boarding but off-snow all together. Boarding between, under – and sometimes straight through – trees, over crevasse-potted glaciers and hiking in zero-tread snowboard boots across 3000m altitude ridges, the experience for me undulates between adrenalin-fuelled elation and genuine terror of death.

That morning we had finally reached the top of Plan de l’Aiguille, closed the day previous due to high winds. Indeed, having seen the 100 person gondola that made it halfway up the steel cord swing back and forth like a pendulum had made me happy to wait. As we stepped out of the crammed télécabine, the coolness of the air and brightness of the sun, gave an innate sense of altitude I didn’t need a sign to perceive. Just making the awkward snowboard-boot-clad descent of the metal staircase to the snow beneath, a wave of vertigo made me cling unnecessarily to the handrail.

The staircase wound round the building to reveal the reason Chamonix has been drawing much more than just your usual inept ski-holiday crowd for centuries – the formidable Mont Blanc. As it loomed large in my eyeline, it was closest I had ever felt to being truly in the mountains. I felt at once exhilarated and intimidated, so keen yet embarrassingly out of my depth with no clear cop out – the only way was down.

Surrounding us were groups of other “skiers” – though not the Gucci-suited or amateur ski-school kind dominating Chamonix’s après-ski scene – each was loaded up with rope, ice picks, crampons and harnesses with 10s of carabiners weighing heavy on their sides. “Do you see that guy up there?” I put my goggles on to look up where Cyrill was pointing. At first, I saw nothing. Then almost imperceptible movement near the peak of the rock face towering ahead of us revealed a climber with what looked like skis tied to his back. “He’s making the ascent,” he says. “Though he’s a bit behind schedule; he better get a move on if he wants to start skiing down before nightfall.”

Cyrill is in full storytelling mode. Struggling with English, his tales of bravery, stupidity and scrapes with death come to me via my boyfriend’s translation of his stilted Spanish, neither of us understanding French. There doesn’t seem to be a summit in the ten that surround us he hasn’t climbed or skied, and more than one he has had to sleep on or be rescued from. Each nook in the profile of the range has a name and a story to tell to match the ridges on his weathered face. Wearing only a tattered cap and wrap-around sunnies, it’s clear he fears nothing – he trusts his own skill implicitly, his board an extension of his sinewy legs.

If the others were nervous it didn’t seem to show – I watch in wonder as Sven, our 6ft 5 Swedish-cum-Viking teammate, does a nifty backflip in the snow. “We’re not allowed down that way,” says Cyrill casually, gesturing in the direction the other groups were heading. “The bastards won’t give me the proper guide qualification. But we can go this way. You first Sara.”

So before I can complain, negotiate or go on strike, I’m following Cyrill down the back side of the Vallée Blanche glacier, his chauvinist insistence I stick close to him while the others flounder behind going unresisted. “Watch out here,” he throws over his shoulder, swerving nimbly between a gaping crevasse and a patch of glacier showing through the snow. I shut out thoughts of clumsily dropping through one of these ice craters – a situation that would likely render the beacon and foldaway shovel we’ve been made to carry useless – and force my snowboard into autopilot, thankful that we don’t stop for long enough for my body to realise where I am taking it.

It’s then two hours till we reach the bottom of the face where the treeline begins and the valley through the forest starts. And as has become routine, it’s me first to go down. The veneer of confidence I’ve almost kept up amongst the all-male group evaporates as I essentially fall the 10 metre drop into the valley beneath, taking a tree branch or two with me. But amazingly I land feet down, in-tact, and make my final inelegant run on jelly legs through the narrow tree-lined gully.

As I start to wonder if we’ll ever see civilisation again, Cyrill stops us on a 60-degree incline in the forest – storytime again. “You know I had a girl in my group the other day – I don’t get many – and, can you believe it, she accused me of being a murderer?!” I wonder where this one is going… “I asked if she wanted to take this route and she said no. I brought her down anyway and she crashed into a tree and broke her leg. Tourists hey?”

Later, packed onto wooden benches back at the UCPA hostel the motley crew of 18-40-year-old mountain lovers – plates piled high with canteen pasta and all manner of cheeses, our glasses filled with cheap French wine and the obligatory basket of cut baguette making the rounds – re-live the adventures of the day and contemplate the remainder of the week ahead.

“I didn’t say anything but I was secretly hoping you’d be too afraid to go down”, 38-year-old Frenchman Christophe says to me. “But you just followed him over the edge. That meant we had to. Honestly, I love snowboarding, but this week I’ve been thinking seriously – there’s a fine line between fear and fun.”

I couldn’t have agreed more.